How does NACE (AMPP) calculate its touch potential safety threshold?

Who are NACE (AMPP)?

NACE are the National Association of Corrosion Engineers, based in Houston, Texas, USA. They are a not-for-profit professional organisation for the Corrosion Control Industry whose mission is to “equip society to protect people, assets and the environment from the adverse effects of corrosion”

NACE publish standards and guidelines for the Corrosion Control Industry which includes NACE Standard RP0177 – Mitigation of Alternating Current and Lightning Effects on Metallic Structures and Corrosion Control Systems, used widely in the Pipeline and Utility Industry as a guideline for safe working procedures around electrical hazards.

More recently NACE merged with the SSPC (Society for Protective Coatings) and became AMPP (The Association for Materials Protection and Performance) and the standard NACE RP0177 has become SP0177-2014.

What Safety Guidelines are issued by NACE (AMPP)?

SP0177-2014 (formerly RP0177) – Mitigation of Alternating Current and Lightning Effects on Metallic Structures and Corrosion Control Systems – This recommended practice presents guidelines and procedures for use during the design, construction and maintenance of metallic structures and corrosion control systems used to mitigate the effects of lightning and overhead alternating current (AC) power lines.

What Voltage Safety Threshold does the NACE Standard set and how is it calculated?

SP0177-2014 (formerly RP0177) (Page 2) – This standard states on page 2 that work done by George Bodier at Columbia University shows the body resistance for an adult male can range from 600 Ohms to 10,000 Ohms and that a “reasonable safe value for the purpose of estimating body currents is 1500 Ohms hand to hand or hand to foot”.  The document also states that work by K.S. Gelges and C.F. Dalziel as giving a range of 6 – 20 milliamperes for an ‘inability to release’ threshold in adult males and that “10 milliamperes hand to hand or hand to foot is generally established as the absolute maximum safe let go current”.

Based on these two values, 1500 Ohms for body resistance and 10 milliamperes as a ‘Safe let go” Current, the Voltage Safety Threshold is calculated using Ohm’s Law.

“thus the criterion within this standard is set at 15 Volts” for a ‘Safe let go’ Voltage Threshold.

SP0177-2014 (formerly RP0177) Section 5: Personal Safety (Page 15)
In section 5.2 “Recognition of Shock Hazards to personnel” it states that 15vAC constitutes a shock hazard and shows tables 1 and 2 to help a qualified person determine safe limits based on the anticipated conditions. 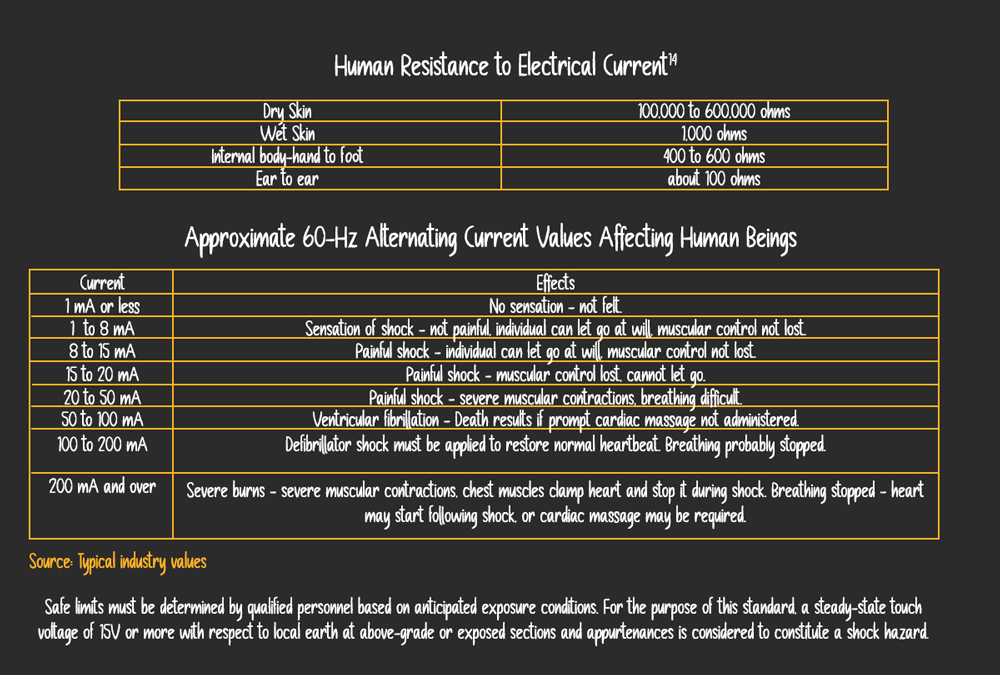 What follows is further information on the methods used by the IEEE and IEC to calculate safety thresholds above the 15vAC ‘Safe Let Go’ threshold that will protect against Ventricular Fibrillation.

Who are the IEEE?

One of the purposes of this guide is to “establish, as a basis for design, safety limits of potential differences that can exist in a substation under fault conditions between points that can be contacted by the human body”

This section identifies the different effects that duration and path of electric current has on the human body and references experiments and reports by Charles F. Dalziel amongst others.

This section recognises current thresholds for specific physiological reactions in the human body as derived from experiments by Dalziel and others.

“1mA is generally recognised as the threshold of perception; that is, the current magnitude at which a person is just able to detect a slight tingling sensation in his hands”

“1mA to 6mA, often termed let go currents, though unpleasant to sustain, generally do not impair the ability of a person holding an energised object to control his muscles and release it. Dalziel’s classic experiment with 28 women and 134 men provides data indicating an average let-go current of 10.5mA for women and 16mA for men, and 6mA and 9mA as the respective threshold values.”

“9mA to 25mA, currents may be painful and make it difficult or impossible to release energised objects”
“In the range 60mA to 100mA, are reached that ventricular fibrillation, stoppage of the heart, or inhibition of respiration might occur and cause injury or death.”

This section states Dalziel’s Formula (Fig1) which can be used for 99.5% of the population to determine a current threshold to protect against ventricular fibrillation. 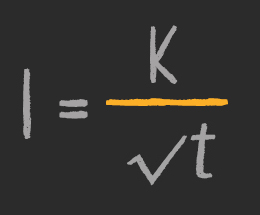 I = Current in milliampere

Dalziel's Formula is further modified for people 50kg and over (Fig 2).

Where I is the current through the worker's body in milliamps, and t is the duration of the current in seconds. This equation represents the ventricular fibrillation threshold for 95.5 percent of the adult population with a mass of 50 kilograms (110 pounds) or more. The equation is valid for current durations between 0.0083 to 3.0 seconds. 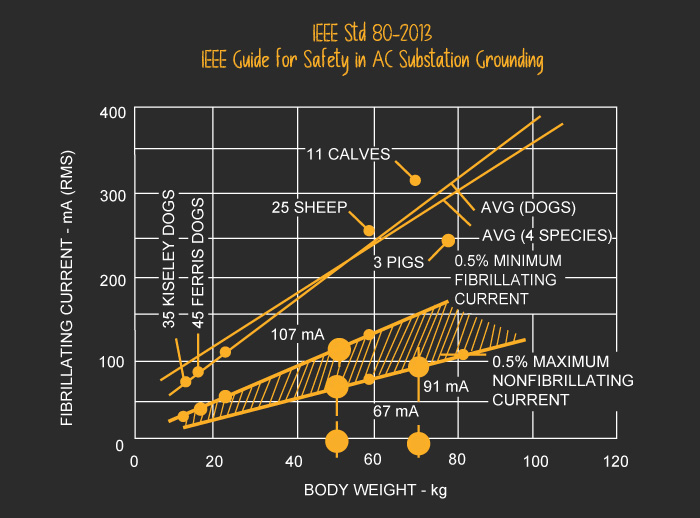 From experiments carried out by Dalziel and others, values are given for Body Resistance from hand to hand (2330 Ohms) and hand to feet (1130 Ohms) but for the purpose of the IEEE 80 Standard an average value for Body Resistance of 1000 Ohms is used.

The standard then goes on to explain how to use this value for Body Resistance, and the Current Thresholds calculated using Dalziel’s Formulas (Fig2 & 4), to derive a value for a safe Voltage Threshold to protect against Ventricular Fibrillation.

For further information on Dalziel’s research and experiments see our blog: How does the OSHA calculate its Touch Potential Safety Threshold?

Who are the IEC?

IEC (International Electrotechnical Commission) is an international standards organisation that prepares and publishes International Standards for all electronic and related technologies (Electrotechnical). The IEC was founded in 1906 with representatives from Austria, Belgium, Canada, Denmark, France, Germany, Great Britain, Holland, Hungary, Japan,  Norway, Spain, Sweden, Switzerland, and the United States. The aim of the IEC is to develop and distribute standards and units of measurement so as to unify terminology relating to electrical, electronic and related technologies. Today the organisation is based in Geneva with over 160 Member Countries that use their standards. 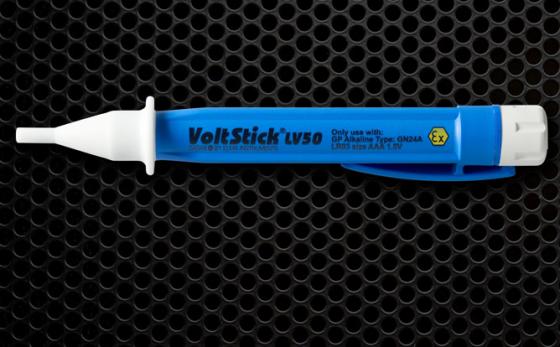 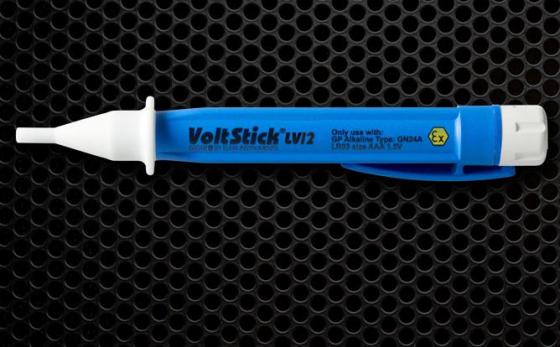